skip to main | skip to sidebar

There is a sort of comic remark about 'Frasier has left the building', but it always got my attention. If you think of it, there are these larger than life persons that we admire but never meet that are in the 'building' that represents life in its largest sense. And so today, in honor of
a true individual and a stellar artist, the building is feeling quite empty.

Andrew Wyeth crossed my life in the usual way that famous artists do. I had the same experience as a young person with Georgia O'Keeffe, Pablo Picasso and Salvador Dali. These top artists were berated, x-rated and celebrated on the covers of popular magazines and newspapers. They were interviewed and then the media would do their usual hatchett jobs and the public at large would think they were odd.

They were odd in the very best way - they lived the life THEY created, and on this planet that is a tall order as the pressure to conform is subtle and constant.

I celebrate the life of Andrew Wyeth. I have been to Chadds Ford several times where he was a child and lived in the shadow of his famous father N.C. Wyeth until he grew into his own man and then some. Of course the Wyeth legacy is also shared by Andy's son Jamie who is a superb artist as well. Upon going there, one now gets to go to the home and studio that N.C. had for his family.
N.C. had the studio built just up a little rise behind his home. As you may know, he died in the middle of his life, along with his grandson when the car he was driving stalled on train tracks. The studio has been left by the family exactly as it was when he was last in it. His palette and the last piece he was working on are still there - looking deserted and not a little forlorn.

Going to Chadds Ford and the Brandywine Museum is a more spiritual experience than most such visits. It has a human quality because it was a mill at one time, and now is the wonderful human-scale place where one can visit its several floors and see works by all three of these amazing men as well as that of some other artists. On one visit, I had the extraordinary experience of getting a tour of Andy's latest show given by his granddaughter Victoria who made it so special and even humorous. She, not being an artist, did her best to be sure to communicate what it was that her Grandfather wanted understood. It was really great.

Now, as has been said of another major figure in our history, he belongs to the ages. But to me it is the empty building and knowing that he has completed his last painting. At least for now.
Who knows where such a being may show up next? Keep the door open......
Posted by Lynne at 10:18 AM 3 comments:

Email ThisBlogThis!Share to TwitterShare to FacebookShare to Pinterest
Labels: Essay 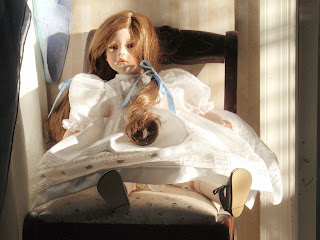 On a recent winter's morning, I was coming up the
stairs and there in front of me was this scene. The
sun could not have played across her pretty face
any better than this if I had set up lighting myself.
The doll is part of a collection that my mother started
years ago and that I have added to now and then
(but only infrequently) and the chair was a doll
chair that I had as a child. I just loved the beauty
of this scene and grabbed my camera before the
January sun moved on its way.
Posted by Lynne at 9:40 AM No comments:

Email ThisBlogThis!Share to TwitterShare to FacebookShare to Pinterest
Labels: photo 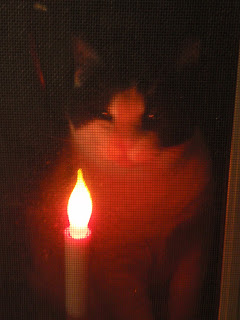 I went out on the porch to take photos
of my wreath and lo and behold, here
was a much better photograph! My
lovely cat was in the window by the
candle watching my every move.
Eventually she'll have to move over
for grandchildren!
Happy New Year everyone!
Posted by Lynne at 11:30 PM 1 comment:

To receive e-mails with my newest work, please subscribe to my Google Group!

How to Purchase Artwork

If you are interested in purchasing a painting, I am very happy to work through PayPal for your transaction. Please e-mail me and I will confirm that the painting remains available and send you a PayPal invoice. Once paid, I will promptly send your new piece of artwork to you to enjoy!

All images on this page are copyrighted by the artist with all rights reserved. Please do not use an image without permission, it is illegal!! Thank you!!